Home / What we do / Our Capabilities / Testing

What we do / Our Capabilities

Assured performance for over 10 years

As a global leader in the design and manufacture of subsea solutions and systems, Matrix understands the need for rigorous testing and validation of products used in harsh, deep water environments.

Matrix’s quality and operational reliability is supported by our Subsea Test Facility located at the company’s head office in Western Australia. Boasting the Southern Hemisphere’s largest commercially available hyperbaric chamber and an inhouse R&D office, the facility allows for the testing of a wide range of products from large energy exploration support components, to items from the defence forces and small subsea electrical connectors.

Matrix’s hyperbaric test facilities have been a key component of our production process for over a decade and operate within Matrix’s ISO 9001 systems and other international standards, such as those prescribed by the American Petroleum Institute. The facility uses state of the art control algorithms and software logging tools to ensure precise control and high quality test data results.

The facilities are supported by a 40-tonne crane that also services 300 m2 of working space with heavy vehicle access, allowing for large structures to be easily carried directly to the workspace, unloaded, instrumented and loaded for testing in the same undercover area. The Matrix facility is licensed to carry out hyperbaric testing up to 5,200 metres sea water.

Matrix operates a suite of 11 hyperbaric chambers in a variety of sizes, with the largest having internal dimensions of Ø1.6 X 7.28 m pressurised up to 52 MPa . By default, the chambers are fully instrumented and capable of recording pressure, buoyancy loss and temperature changes over time. Other types of instrumentation can be installed to suit client requirements.

The chambers have been designed to accommodate electrical and hydraulic access, as well as cameras for visual monitoring via a series of penetrations on the lids of each chamber. All chambers are orientated vertically to facilitate loading and unloading via our 40-tonne crane, with larger chambers mounted underground for safety and environment stability. 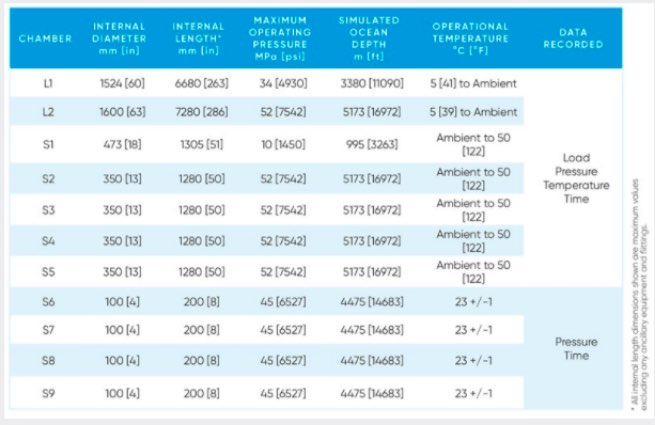